Just a quick post! I have started a separate blog for the best freeware fsx   . On this blog I will be taking a look on the must haves for FSX that are free. I have found some great stuff.... See you there.
Posted by Fat Boy at 01:57 No comments:

This episode had me on the edge of my seat. It covers a topic that all of us in some way fear " failure" or as the RAF call it " chopped ". One of the trainee pilots is having trouble landing the aircraft. The rest of the circuit is fine. I could imagine this could be any of us as these planes are a little slippery and are very unforgiving on the touchdown ( not like the Cessna 152 ). With limited flying hours the RAF put the guy on review and try and help him through. I wont spoil it for you, watch for yourself.

Get ready for the fourth installment of "Fighter Pilot". This is where the action starts. The trainee pilots get their first taste of flying the Jet Provost. I find it amazing to see the incredible aptitude of these guys. Sadly not all of them are going to fly, but just to get this far they have done so well. It takes a certain type of person to fly a fighter jet, some would say the perfect type of person. I have no idea myself about how difficult this course is , but I am pretty sure these guys will be taken to their mental limit.

I have been practicing my circuits in the JP5 and I must say they are getting better. I have found that understanding the nature of the engine and power settings give me extra time to fly the aircraft and the whole circuit becomes a lot easier.

There is no doubt this little exercise has relly improved my flying.

In this episode we get the first look at the jet provost the aircraft I am flying now. You wont see it until right at the end when the instructors perform a fly past at the passing out parade, but now most have become officers, the selected aircrew tainees will get their first taste of a jet fighter trainer.

Being critical on your flying

To improve my flying skills I have become very critical on every thing I do. There is a saying in the RAF, “ accuracy is everything” and I here what they are saying. Don’t fly 50 or 10 feet above your assigned altitude and if your speed is supposed to 150 kts make sure it is 150 kts not 103 or 105 kts. In other words……………… nail it. Since I have started on this notion my flying has improved considerably. I usually fly a few circuits in the jet provost with the voices of the instructors echoing in my head about not having the altitude right or the speed right, then I will fly a circuit at KAI TAK in the PMDG 737 and apply the same techniques.

You will be surprised how this will change the way you fly.

Here s a picture of the aircraft I am using , it is freeware and you can get the Jet Provost JP5 here.

I am also using the Linton on Ouse freeware scenery which you can get here.

Get used to this aircraft, it is a great trainer and a great piece of freeware. You can download it here

I am having a lot of fun with this simple to fly little jet. For freeware it is very well made. The Viper engine is very powerful so you will encounter over speed issues if you do not power back well before your target speed.


Practice level flight trimmed out at 150kts at about 1000 feet above round level ant note your power setting. Mine is about 7500 rpm. If you are learning to fly knowing you power settings for certain situations is a must. In the climb I reduce power to 8000 rpm at a pitch of about 10 degrees I then adjust the pitch until I get 150kts...... Then trim.

Went to the In Hampshire . The James Bond 007 show is there at the moment. Found a few treats . The main one for me was the BD5 Acrostar Microjet used in the film Octopussy and then right net to it “Little Nelly” from You Only Live Twice. 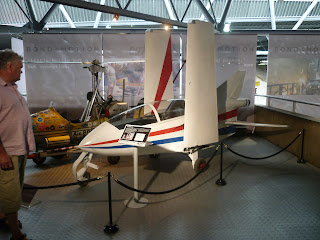 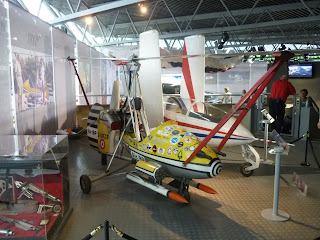 Now take a look at the real thing

This little bird really did fly
Read more »
Posted by Fat Boy at 13:43 No comments:

For those of you who have watched the first episode of the BBC show Fighter Pilot here is the second episode. You can totally understand their desire to fly and you know that most are destined for failure. See if you can pick out who will make it at the beginning. What a shame that there are such highs and lows in life, especially when it is your dream to fly. I have no doubt that I would have been chopped; come to think of it I probably would not have been selected for officer training in the first place. But this is where the joy of flight simulator comes into play. You can fly anywhere in the world in any aircraft you like and you can make as may mistakes as you like. Flight simulator has come a long way in the two years that I have been away and I am very excited about getting my sim experiences as real as I can.

I must say that training as a military pilot and being accurate and critical on performance will help you flying skills no end. At present I am flying the jet provost “jp5” which is freeware, and I am using the Linton On Ouse scenery which is also freeware. My first sorties are just circuits at 1000 feet above runway, climbout and circuit speed 150 kts with gear down and firat stage of flaps at 115 kts by the end of the downwind leg. Form the end of the downwind leg I turn and descend at 115 kts all the way to about 300 ft above runway where I apply landing flap to land on the numbers at about 90kts, not as easy as it sounds.

Happy flying.Here is the second installment of Fighter Pilot " Officers and Gentlemen"